Tales From the Undercroft still going in 2017!

The good news is that Tales from the Undercroft continued after Dave Tonge left to pursue his own storytelling career and has been given a new lease of life under the management of Sarah Walker. They still have a mix of local and featured tellers as well as a regular open mic event and still takes place in the undercroft of Jurnets bar (part of Wensum Lodge) the first Wednesday in every month.

This blog-site is however in retirement and for regular updates on events happening at Tales from the Undercroft please visit their Facebook page at..

No more Tales from the Undercroft

Its sad I know, but unfortunately we have had to wrap up Tales from the Undercroft, because our regulars are just too busy with their own projects to keep it going.

You will however be pleased to hear that storytelling is not dead and buried in Norwich and some of the club regulars will be coming together for special events, some of them as the storytelling troupe, The Worshipful Guild of Fools, Liars and Sturdy Blaggers, so be sure to come back to the blog occasionally to see whats going on. We will also be posting about other storytelling events happening anywhere in the region.

It only remains to thank all of those who have supported us over the last few years and I hope to see many of you whilst telling here, there and anywhere else for that matter!

Dave Tonge, The Yarnsmith of Norwich
Posted by Tales from the Undercroft at 4:07 PM No comments:

A three for all on July 2nd

Our meet on July 2nd is our last for the summer and we won't gather again till September.

And so before the lethargy of hi summer hits with it's definitely not cloudy rainy days and also those nights where the flys crawl on your face, but when you turn on the lights  they are gone and you dont know where they are gone, but as soon as you turn off the lights they are back again.... Before all that we are to expel the last of our spring energy with loads of three minute stories from the floor, jokes jests and all manner of wit and wonder.

Sorry to all our regulars including Suzanne, Jonathan, Gerry and Adrian who do not appear, but your time will come!

As per usual we meet from 7.30 for an 8.00 start least Jim do absolutely nothing as he is gone. Where to nobody knows and he took our pen, table lamp and one remaining candle with him.
He is missed. So is the table lamp.


Posted by Tales from the Undercroft at 2:24 AM No comments:

It’s a show of two halves! Brazilian storyteller Ana Lines and English storyteller Cath Edwards present  a special tribute to the World Cup and its host country, Brazil.
In something of a departure from their usual traditional repertoire, Cath (born in the country of football’s origin) and Ana (born in the country where they’re really good at football) have found some of the game’s most entertaining tales. With football heroes , some quirky memories, a swift tour of some of the funnier chants, at least those that are repeatable, and the odd joke, this is a show that even football-phobes will enjoy.


We are really looking forward to this one, although in truth its a game of three halves, for Ana and Cath have asked that some of our regular tellers fill the second half of the evening with stories from the countries taking part. Not all of them obviously as there are not enough of us, but then again new tellers are always welcome at the Undercroft!


As per usual we gather from 7.30 for an 8.00 pm start and you never know Jim  might join us, so dont be late lest he have your guts for garters!

Dave Tonge - The Yarnsmith
Posted by Tales from the Undercroft at 12:39 PM No comments:

May 7th at the Undercroft

Since May is traditionally a time for celebrating the coming of summer with games, fires, may poles and all kinds of ritual trespass and hi jinks, then it is only fitting that we celebrate with celebratory stories from the floor whatever they might be. 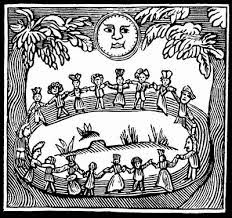 Kind of leaves it open really, which is just the way we like it at the Undercroft, with people telling tales that they like rather than stories that fit a certain theme.

If the teller enjoys the tale, then there is every likelihood that their audience will to!

With that in mind, we hope to see many of you there on May 7th.


Storytelling starts at 8.00. I would say be there for 7.30 lest Jim has your guts for garters, but alas he has had his nipples pierced and run away to join the circus...

Dave Tonge - The Yarnsmith
Posted by Tales from the Undercroft at 3:20 AM No comments:

April 2nd - Kelly Kanayama performs, 'If you ever leave me'

In the first half of Tales from the Undercroft in April, one of our regulars, Kelly Kanayama will be performing:


If You Ever Leave Me

All in the middle of a forest that could be magic.

Think you've heard it before?

If You Ever Leave Me retells Western folktales of murder, passion and betrayal from an Asian-Pacific perspective to present the familiar as you’ve never heard it before. Kelly Kanayama draws on her Japanese-Filipino-Hawaiian upbringing for a visceral exploration of the family ties that bind us (in every sense of the word), the sacrifices we make in pursuit of a happy ending, and the stories we carry with us – whether or not we mean to.

Audience feedback:
"Beautiful"
"Drew me in!"

In the second half of the evening it will be tales from the floor. No theme, just what ever takes your fancy. Let me know if you wish to tell as spaces might be limited.

Try to be there by 7.30 for an 8.00 start lest Jim actually comes to the Undercroft for a change and has your guts for garters

Dave Tonge - The Yarnsmith
Posted by Tales from the Undercroft at 8:29 AM No comments:

Power to the People on March 5th

We were so inspired by Gareth Calway's performance of 'Cromwells Talking Head' last month (Of Civil War and the struggle for democracy) that we decided to focus on tales where the common sort get the better of their 'betters', this month.


It shouldn't be that hard as many of the folk tales we tell at the Undercroft celebrate working class heros who championed the poor.  From Robin Hood to Tom Hickathrift, they stood up for the rights of the people and cocked a snoop at the none to noble nobilty. Chap book stories and ballads printed and reprinted from the 16th  and 17th century on had to appeal to as wide as possible an audience by presenting heros that the people could relate to. Chivalric stories of Knights and fair Ladies were replaced with tales of clever beggars, wise fools and characters like Joe Millar, a seventeenth century comedienne who would happily mock the pretentions of rich men.

Stories like these would have appealed to men like Robert Costen who was more than happy to speak out against authority. In 1560 he appeared in court in Norwich for that:
At the last Magdelen Fayre [He] did go up and down the fayre with a pair of rams horns* about his neck gathering a great company of lewd people to follow him with clubs and staves and bagpipes, terming himself Mr Mayor and going from booth to booth and getting drunk and shaking his horns saying that they were his ruff (Collar)

And so if you want to follow in Robert Costen's footsteps and stick two fingers up at the so called great and the good, then come and join us on March 5th. I could even invite David Cameron. Do you think he would come!

As always we meet from 7.30 to start telling at 8.00 lest Jim has your gust for garters.
If he turns up that is!

Dave Tong - the Yarnsmith
Posted by Tales from the Undercroft at 12:08 PM No comments:

Tales from the Undercroft is a monthly gathering of storytellers and those who like listening to stories. We meet the first Wednesday in every month at Jurnets bar in the undercroft of Wensum Lodge in Norwich. Our aim is to promote storytelling, local storytellers and also guest tellers from all over the UK. If you want an entertaining night of cracking tales then come and join us. You can find out more by contacting Dave Tonge at the adresses below:

Links to other Storytelling Clubs